Demolition on the former Mootz Candies property in downtown Pottsville got underway Wednesday.

The Canary was there as a demolition crew wrapped up work for the day.

You can see holes punched into the side and a portion of the porch roof on the facade is missing. The wrecking crew appeared to be removing items from inside the once beloved homemade candy store downtown. It wasn’t Easter if there wasn’t one of Mootz’ big coconut cream eggs, coated in chocolate with your name on it.

Windows were also removed from the corner property of the former candy story. 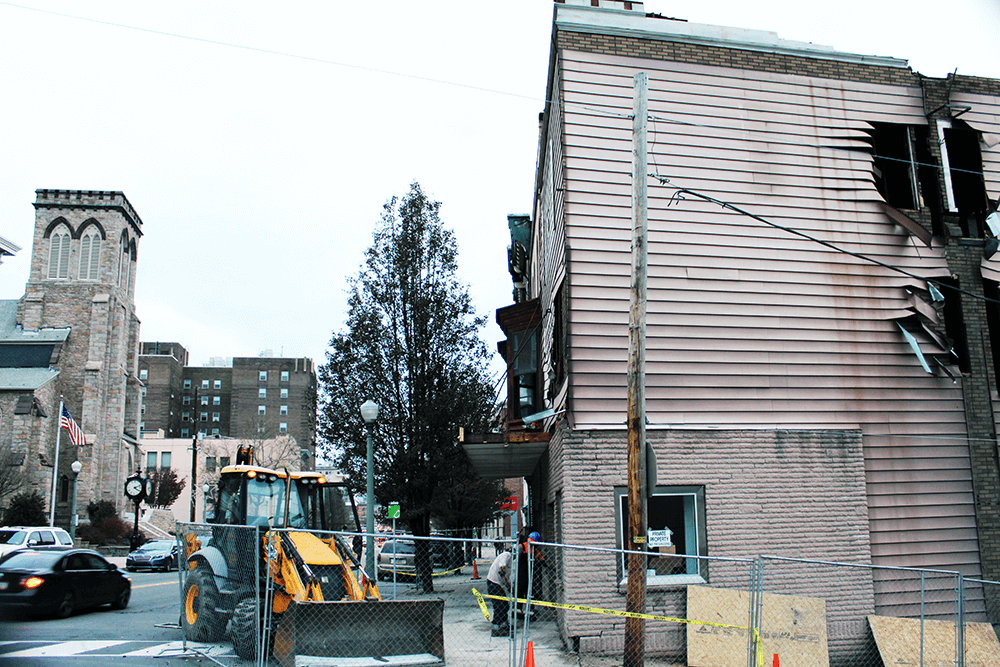 These scenes surely drum up some sad emotions for Pottsville natives and ex-pats. Mootz Candies was a beloved downtown family-run business.

So many in Schuylkill County have great memories of shopping there — going there with their parents or grandparents for the first time. Maybe it was the smell of chocolate or the promise of getting a clear toy candy — or their famous coal candy — if you didn’t throw a tantrum.

And for others, Mootz Candies was their first job. They either worked downtown or at the Fairlane Village Mall store.

The store’s been closed for nearly a decade now. The previous owners of this property claimed that construction activity at the new “intermodal” Union Station permanently damaged the foundation of the former candy store. They sued and eventually settled that lawsuit but never re-opened the candy store.

It would have never been the candy store that holds so many memories for Pottsville residents. But it’s sad to see it go regardless of its current condition.

That’s especially true when you realize what it’s about to become. It definitely won’t be a place that will create memories for the next generation of the city’s people.

The Future of the Mootz Candies Store in Downtown Pottsville

If we gave you 3 guesses on what’s to become of this property once the former Mootz Candies stores are gone, you’d probably get it right on the first try. It’s going to be a parking lot.

But don’t plan on using it should you find yourself in downtown Pottsville. The property got purchased by the Municipal Authority. Their headquarters are across South Centre Street downtown. They already have a parking lot behind the buildings they apparently needed a few decades ago. But apparently they need more.

The plan is to use the parking lot on Centre Street for employee parking, about 10 spots. There MAY be some customer parking spots in this new lot but don’t bet on it.