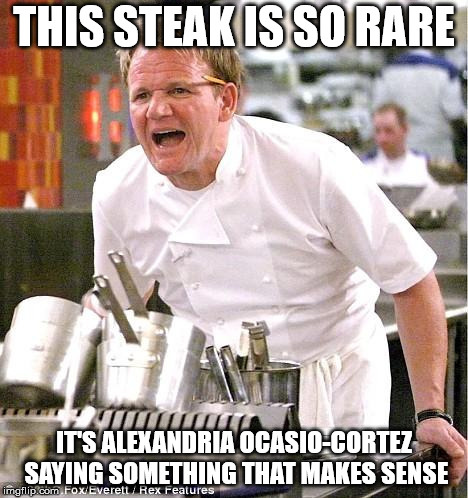 America’s favorite pie-eyed Socialist can’t escape the headlines. And there is no shortage of Alexandria Ocasio Cortez memes.

It’s almost as if there’s some organized agenda by the mainstream corporate deep state media to vault the New York Congresswoman to fame.

But why? Why not one of the brighter stars, not just the pretty one?

Of course, AOC checks off all the boxes for the virtue-signaling Democrats.

She’s got everything that Obama had except enough candles on the birthday candle:

One box they forgot to check on her was “Brain”.

Most recently, AOC released her Green New Deal, in which she apparently calls for the elimination of airplanes in favor of high-speed rail (so long, Alaska and Hawai’i). She also says cows have to go too. Their farts will destroy the planet.

If the planet can survive the methane aftermath of even one Kielbasi Festival in Shenandoah, surely some cows can’t do more damage than that.

AOC has said her share of jaw-droppers but the internet has filled in nicely with a strong meme game.

This is clearly a work in progress. She’s only been in office for a month and we’ve already got a treasure trove of Alexandria Ocasio Cortez memes.

Check out our favorites below: