The Big Juicy Van on the Side of Route 61 is Gone
Advertisement https://pagead2.googlesyndication.com/pagead/js/adsbygoogle.js?client=ca-pub-1658728627906147 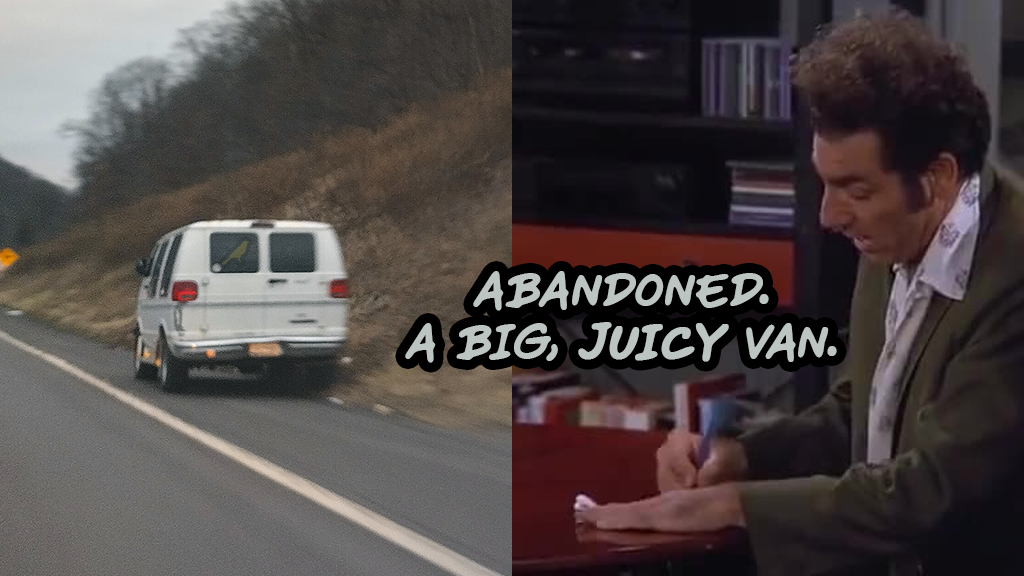 We think the big juicy white conversion fan that was left abandoned on the side of Route 61 may have set some sort of record.

The van was parked alongside the northbound lanes of the highway between the Cressona Mall and Mount Carbon, just after the jughandle in the middle of that stretch.

We weren’t tracking its location from the beginning but it had to be there for close to 2 weeks, maybe a little longer.

But when we went to check on its status Thursday evening, sadly, it was gone.

We were kinda hoping the van would stay, at least through the weekend. So much of our content plan revolved around that van being there.

We’d even written a haiku about it.

OK, we didn’t write the haiku. We had to try out this chatGPT AI tool everyone’s been talking and/or freaking about so we asked it to write us a haiku about an abandoned van on the side of the road.

Here’s what it wrote:

Abandoned and still,
When will someone move me on,
Forever rusting.

But since it’s gone now, this is all old news, really.

In addition to the haiku (because we really had nothing else besides that), we were planning on another one of our infamous meme stories that tend to be based on Seinfeld episodes.

This one had a perfect match, just like the Summer of George (Halcovage). See the image at the top of this page for an idea as to where we were going with it.

We can’t help but think of the episode where Jerry’s old friend Fragile Frankie hooks him up with a van. It apparently fulfilled Jerry and Frankie’s boyhood dream of owning a van.

Turns out, Jerry never really wanted a van. And he was only friends with Frankie because he had a ping pong table. George called Frankie the “summer me” because Jerry hung out with Frankie only during the summertime.

Later in the episode, George has a plan to use that van to disgust his parents in ways we won’t discuss but it’s George who actually gets the eyeful when he disobeys the cardinal rule regarding vans that are a-rockin’ …

Alas, however, the van is gone and so is this story. We’re just going to off into the park and dig a big hole and sit in it until another van gets abandoned on the highway.

In this article:Featured, Mount Carbon, Pottsville