What a weird year 2019 turned out to be here in Schuylkill County.

For starters, we’re thankful for the thousands of people we reached in this, our first year of publishing with any sort of regularity. We’re excited for the future but before we get there, let’s take a look back at some of the biggest stories of 2019 in the Coal Region.

A lot of you joined us late, so you may have missed some of the big ones.

Here are the big stories of 2019. This year was not a good one for the male private part. It got a few people in a lot of trouble in 2019.

Story of the Year: The Death of Patrick Murphy

Easily, the story of the decade. It’s still shocking to hear the headline.

Pat Murphy did what?

The year 2019 will always be remembered as the year Pottsville lost one of its more outgoing cheerleaders. That’s businessman Patrick Murphy.

In the early morning hours of February 28, Murphy entered a seedy hotel in New Orleans with a known prostitute and didn’t come out alive. Next year, we’ll likely learn the fate of the woman accused of killing the owner of Murphy Jewelers in downtown Pottsville. Until then and after that, many locals will try to remember the Murphy they knew prior to his untimely death.

Aside from his businesses, Murphy also served in city government, school government, and raised and donated thousands to local charities.

For our complete coverage of the story: The Latest on the Patrick Murphy Murder Case

Sexual assault against minors is particularly heinous. And this year, we learned of four men who got caught thanks to one crafty local police officer.

Of the four people who got caught soliciting sex from an underage male, one was a well-known music teacher and another a borough councilman.

Music instructor Dale Schimpf and former Port Carbon councilman Chuck Joy were among four men who used the GRINDR mobile hook-up app to arrange to meet a boy who turned out to be 13. The men were eventually caught when a Tamaqua police officer posed as a user on the site and caught the four locals who assaulted the boy originally. It’s a sexual assault conviction that led Gary Haney to Pottsville. He was apparently one of many people living along the Schuylkill River until, in 2019, he turned up dead. Haney’s body was discovered in a poorly disguised area along the train tracks near the KFC restaurant in Pottsville.

Further investigation into Haney’s past revealed he was a sex offender who served 15 years in prison for incest. His life a shambles, Haney found himself among the homeless outside Pottsville.

His death underscores a growing problem here in Schuylkill County and one to watch in 2020.

Another from the men-behaving-badly file: the so-called Pottsville hazing controversy.

This story involved an anonymous accusation about misbehavior in the Pottsville high school football locker room back in 2018. However, the story came to light in early 2019 and still remains as part of a federal discrimination lawsuit against the school district.

As best we can tell, at least two students allegedly performed some acts of a sexual nature in front of, on or near a mentally disabled adult male who hung around the Pottsville football team for several years. Though that’s disturbing enough, it was the school district’s response that got a lot of people in a lather.

Now, due to the school holding a kangaroo court to rush to “convict” one of its students involved in the incident, that student is suing the school saying he was denied basic civil rights.

If a federal lawsuit connected to an alleged hazing incident isn’t enough to mar a school district’s reputation, wait, there was more in 2019.

As lawyers bleed our property tax money dry on that one, we learned that Pottsville Area School District is in dire financial straits. And it was their own doing that caused a double-digit million dollar balance disappear in the course of this decade.

Earlier in 2019, the Pennsylvania Auditor General released a special report chastising Pottsville Area School District officials for their poor financial planning. Lack of records, reckless spending … it all added up to a scathing report which the school district immediately tried to tamp down to say it was on top of the problems.

So Let’s Buy a Bunch of Solar Panels Buoyed by that Auditor General’s report, the delusional members of Pottsville school board decided to make one more decision that made us all scratch our heads (and beg for state interference). Just after re-organizing following the November elections, the newly formed Pottsville school directors hastily voted to approve a plan that puts solar panels on the roofs of all the district schools, the administration building, and the soon-to-be former practice football field.

It’s a deal that makes any salesperson happy, that’s for sure. But somehow, we’re getting all this without putting money down. All we need to do is take out a loan in a few years to pay it back.

Blinded By the Light – The Pottsville Solar Panel Disarray

All that, save for the solar panel stupidity, is a result of men behaving badly. Thinking with the wrong head, as they say.

Let’s take a look at some of the other big stories in 2019 that didn’t involve thinking with the pants first.

Pottsville Violence on the Rise

The rise in hard drug use and addiction breeds a culture of violence. And Pottsville is not immune to this epidemic. Unfortunately, the violence level in 2019 seems to have gone up and may only be getting worse.

Back in March, Jose Cruz got himself shot by police in the 500 block of Mahantongo Street:

A month later, we all wanted to know … Where’s Bucky?

Bucky Berger was named a suspect in a stabbing incident in Saint Clair.

In July, a suspect in a “shots fired” incident in Pottsville taunted police with a Facebook post after being identified as a person of interest in the case. Who can forget …

Suspected Pottsville Shooter – I’m Innocent and at the Beach!

In September, the BB&T Bank in downtown Pottsville was robbed but the suspect caught soon afterward:

All these incidents (and more) are likely related to the root cause of Pottsville’s problems, dangerous street drugs like heroin and fentanyl. In October, law enforcement officials completed what they called the biggest drug bust in Schuylkill County history.

Is This Some Kind of Bust? Very Impressive, But Are They Effective?

We saw how bad the drug problem really is following an incident in late-August. That’s when police discovered a Mahanoy City woman high on fentanyl in a Hazleton gas station bathroom. Oh, did we forget to mention her kids were in the car? And there were 100 bags of heroin in the car, too?

Enough of those people … here’s some other big news.

Despite one particularly contentious race, Schuylkill County Republicans dominated the 2019 election. The GOP swept into county offices, winning most races up grabs by a 2-to-1 margin on Election Night.

We may not have done much to drain the proverbial swamp in Schuylkill County politics, though. But 2019 did get one of these creatures out of the swamp. In March, former Schuylkill County Clerk of Courts Steve Lukach pleaded guilty to corruption and fraud charges stemming from years of financial fraud in that office.

Before the Lukach drama unfolded, the Schuylkill County Prothonotary office endured its own questionable behavior. In the end, we elected a new person to this position while the previous Prothonotary resigned without responding to an audit request.

Let’s look at some of the other big news from 2019 in Schuylkill County.

In addition to that, here’s a look at some of the other newsmakers that weren’t troublemakers in 2019:

Over the Memorial Day weekend, President Donald Trump visited Japan. While there, POTUS delivered a speech and during it, called on a local soldier to give some remarks while honoring a family member of former soldier.

Trump called on the heroics of several fallen U.S. soldiers. Included in his remarks was Tower City’s John Schaeffer.

Been a rough 2019 in Girardville. Actually, place any year this Century in that sentence and you’ve got it right. 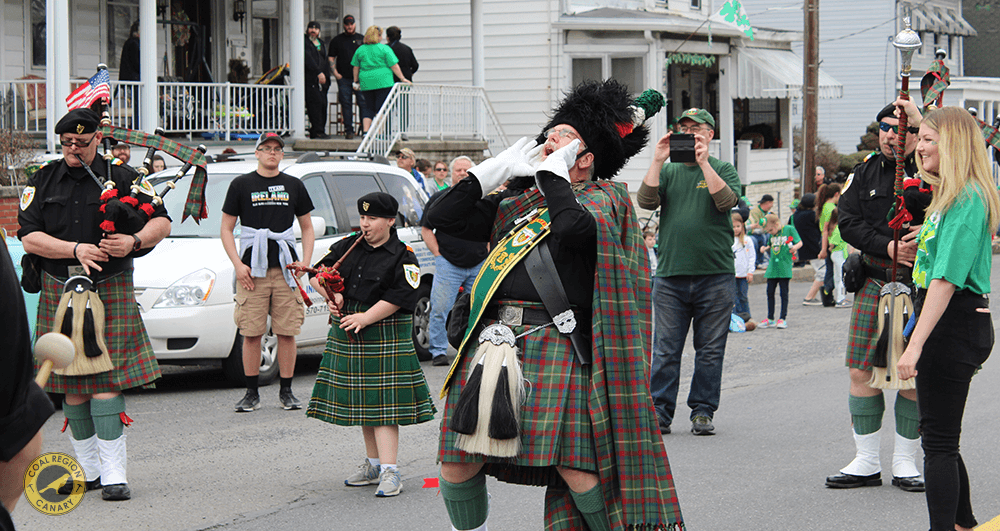 But this year did feature a pretty boisterous St. Patrick’s Day parade.

Yuengling Brewery celebrated 190 years in business in 2019. And to cap off the year of festivities, the company held a special street fest/concert in downtown Pottsville.

Thousands flocked to Pottsville to celebrate the company and check out the intense fireworks and listen to special headliners Better Than Ezra.

It was a bittersweet year for local athletes. While some schools celebrated monumental, historic achievements, one school experienced unthinkable shock. In a late-season football game, North Schuylkill’s Jaden Leiby suffered a broken neck and was immediately rushed to Lehigh Valley Hospital for emergency surgery. Leiby faces a long road to recovery. For weeks following the tragedy on the gridiron, local residents have shown their support for Leiby with a #Prayersfor6 online campaign coupled with massive fundraising efforts to help that family offset costs associated with his recovery.

The Lady Cardinals used a final-inning rally to preserve a perfect season and capture the school’s first-ever state championship in softball.

Two local baseball standouts were drafted in the 2019 MLB Draft.

Hey, you can’t review the year it was in Schuylkill County without going over a few of the weirdest headlines.

Both of our top stories come from Ashland.

Seriously, we still can’t figure out the thinking here: The Ashland Christmas Tree is Getting Some Feedback

Before this Christmas nightmare showed up, Ashland was busy trying to ruin another holiday. Just before Halloween, the town announced that  Trunk-or-Treat event would REPLACE the annual, traditional Trick-or-Treat night.

They were very clear about that. Then, the locals gave them the business about that decision and they tried to reverse course.

Rather abruptly, longtime Pottsville radio disc jockey RC left his job at WAVT-FM, T-102. The airwaves aren’t the same without him, surely.

This ended up being one of our most-read articles in our first year of publishing.

The Canary’s first “viral” post happened before the Murphy murder or any hint of the Pottsville hazing incident. And it wasn’t even local. We were just screwing around with a meme post format and decided to jump on the Jussie Smollett hoax train. How is this guy still walking freely among us?

We thought this Dutch drinking game looked like a lot of fun. And honestly, we suck at cornhole or the bean bag game or whatever it’s called. So, we shared this story on a few guys who built this crazy marionette drinking contraption. We still get mail on plans for this doohickey but we don’t have them.

The Coal Region lost some good people in 2019. No one death is more important than any other but here’s a look at some of the local people who died in 2019 whose lives impacted way more than just their family: