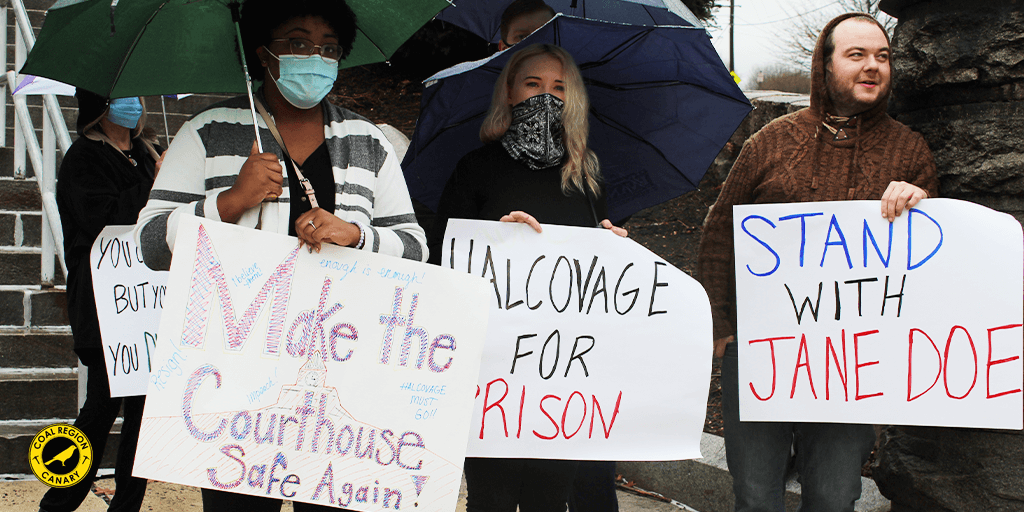 A small but energetic group of protestors gathered on the steps of Schuylkill County Courthouse Sunday afternoon calling for the resignation of Commissioner George Halcovage.

The group of about 10 people stood mostly under umbrellas as a steady rain pelted them, soaking their protest signs. They chanted and responded to honkers as they drove by.

“GET HIM OUT,” one lady yelled as she drove by. “He’s a predator and he is a danger to the women in the Courthouse,” Lisa Hollenbach, president of the Schuylkill County Democratic Women’s League, told us in front of the Courthouse steps Sunday.

Hollenbach held a reversible protest sign. On one side was a crudely drawn caricature of the Commissioner with “HALCOVAGE IS NO CHOIR BOY … RESIGN … IMPEACH” written on it. Another attendee to Sunday’s show of activism was CJ Porter, of Pottsville. He said to us, as the protest marched quickly to Halcovage’s parking space in front of the Courthouse Annex, “We have touch-free toilets. Why can’t we have a touch-free Commissoiner.”

Even if just for a few brief moments, the protest was joined by Schuylkill County Clerk of Courts Maria Casey, a Republican. Casey has put a public voice to many of the accusations against Halcovage since the initial public whispers of potentially inappropriate behavior at the Courthouse back in 2020. Despite the relatively low turnout, likely due to the weather, Mahon indicated to us that she remained unfazed.

“I would have been here by myself but I didn’t have to, and that means a lot,” Mahon said.

Mahon also told us she doesn’t believe Halcovage is going to resign from office. Over the last week, nearly every Schuylkill County politician – including all 3 GOP members of the State House of Representatives representing us in Harrisburg – came out of the woodwork to demand Halcovage resign as Commissioner.

Halcovage, of course, hasn’t resigned, and maintains the allegations against him are untrue.

So, the next charge will be calling for impeachment, Mahon says.

On Sunday, she called out State Rep. Joe Kerwin, who she said indicated to another news source that he wasn’t fully aware of what was happening at the Courthouse. Mahon suggested he get up to speed on the matter because impeachment of a County Commissioner begins in the House of Representatives in Harrisburg. And it’s on the representatives of the county in question to take the first step.

In the meantime, Mahon says people need to start talking about what’s happening, because maybe they’re in the dark on what’s allegedly happening at the Courthouse and in County government, too.

“Talk about it. Tell everybody you know,” she said. “We don’t have that dialogue about what happens in our county anymore. We’re too distracted with national politics. This is your county. You can do something about the Courthouse.”