What it Means When the Media Uses the Phrase 'Baseless Claim'
Advertisement https://pagead2.googlesyndication.com/pagead/js/adsbygoogle.js?client=ca-pub-1658728627906147 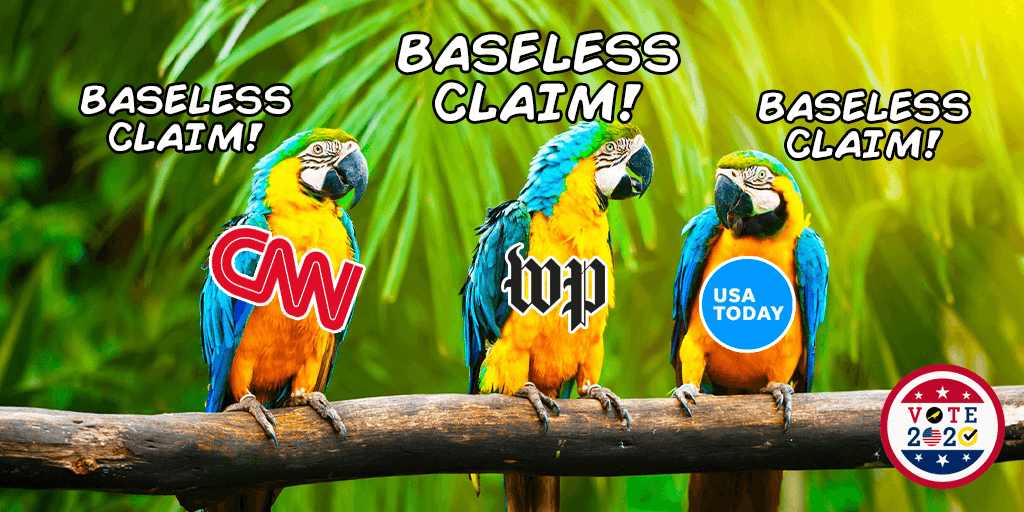 You’ve likely seen numerous media reports that use the phrase “baseless claim” in the headline.

But even more sure than that is this fact: When the media uses the phrase “baseless claim” it means just one thing. It means they never investigated it. And they’re not going to investigate it.

When the Media Calls Something a Baseless Claim, It Means They Don’t Want to Believe It and Won’t Bother Investigating

We did a Google News search for the phrase “baseless claim” and we found a wealth of results, all from media outlets you’re led to believe are credible. Here are results from the first page and a half of results:

USA Today just decided on its own that what Trump is saying about election fraud is a “baseless claim” but it provides no proof that what he’s saying is actually baseless.

Fake News CNN says Trump daring to say that the election may be ripe with fraudulent ballots and ballot counting activity is only going to screw up the rest of the world. Talk about your baseless claim …

It’s true. Any time the media says something Trump says or writes is a “baseless claim” it’s actually fact that what they claim is the real baseless claim.

As we saw with the Hunter Biden laptop scandal that never seemed to get off the ground, the social media networks play a role in this “baseless claim” nonsense, as reported by The Verge:

You can always count on The Washington Post to dismiss anything Trump says as a “baseless claim” without actually investigating what he’s saying.

Again, from Politico this time, just saying something is baseless without actually investigating to see if it’s truly baseless is in itself, an actual baseless claim.

So, how should the media handle it?

If they’re not going to take the time to investigate the alleged baseless claim to prove it is, indeed, baseless, the media should cite who’s claiming the claim to be baseless.

It’s a convenient, albeit lazy, way to completely dismiss anything said by Trump or Republicans that doesn’t fit the mainstream liberal narrative.

Maybe the term journalist is more appropriate though, since it seems all they’re good at doing these days in journaling leftist talking points and ignoring the duties of their job.

Even worse, none of these outlets and thousands more who repeat this “baseless claim” nonsense aren’t even thinking when they write it. One outlet reports it and the others simply copy and paste.

It has to be said, too, that these outlets pushing the phrase “baseless claim” are the same “news” outlets that for 3 years or more pushed the ultimate baseless claim, that Donald Trump was a Russian operative or compromised by the Russians or that our 2016 election went in favor of Trump with the help of Russians, even Vladimir Putin himself.

This same news media spent years and uncountable hours of air time and pages and pages of newsprint trying to convince you that Trump was compromised by the Russians. They pretended to be doing actual reporting and investigating when in fact they were being spoon-fed disinformation from Deep State operatives who already knew the Russian collusion story was a big fat hoax. None of it, not a shred, is true. That’s the real baseless claim.