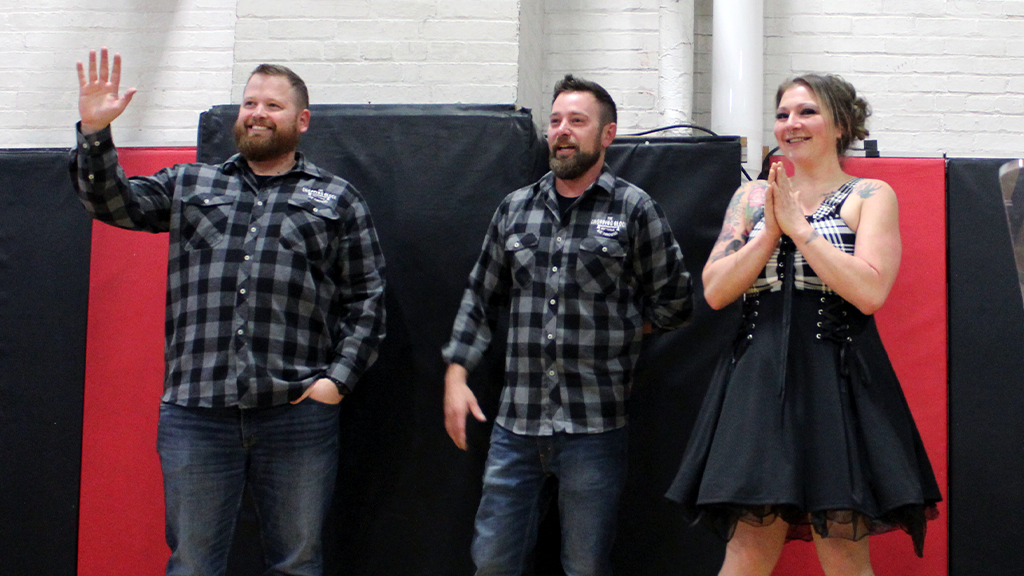 An axe-throwing bar and a skate shop were the new business ideas that prevailed in the Launch Pottsville startup competition that concluded Thursday night.

About 200 people – mostly city officials and fellow business owners – attended the final night of the competition, held at Schuylkill YMCA on N. Centre St. in the city. The event was held to give four finalists one last chance to pitch their proposed business ideas, in a Shark Tank style format, to a panel of judges. Nearly 200 people packed into the Schuylkill YMCA facility on N. Centre St. in Pottsville on April 28 to celebrate the end of the Launch Pottsville business startup competition.

Among the four finalists, two were selected to receive a funding and services package to help their businesses off the ground:

These ideas topped Arrow, a proposed event and co-working space in the former Nathan’s Furniture store on N. Centre St., and Frosted, an artisan donut and specialty ice cream shop on Mahantongo St.

“It was a tough decision, but all four were worthy candidates,” Kim Lorimer, from Evans Network of Companies, Schuylkill Haven, and one of Thursday’s judges, says. Jared and Allie Doran explain to Launch Pottsville competition judges their plan for Arrow, a proposed event and co-working space to be opened at the former Nathan’s Furniture store on N. Centre St. in Pottsville.

The culmination of the Launch Pottsville featured the four finalist business ideas being presented by their founders.

Each presentation spelled out what their business was, where it’d be located in the city, how much it would take to get it off the ground, and what it’d provide to the local economy. Competitors were vying for a pot of funding and startup services.

While this process would be an arduous one for any entrepreneur at any time, the path to Thursday night’s event was unique. When this competition started back in 2020, the prospective business owners faced a very different situation economically.

Clarissa Crist, who plans to open Rage Parade this Fall, says her “passion and drive” kept her focus on the competition through the pandemic.

“That’s what led me through this,” she says. “Nothing’s really changed for me. I’ve always been driven.” Now they’re ready to get their businesses open to the public.

“It was a lot of effort. We worked really hard to make it happen,” Alex Chivinski, who along with his business partner John Marsh, plan to open The Chopping Block in 2023.

Chivinski says the key to winning the Launch Pottsville competition was knowing the business.

“You’ve got to know your business and how you’re going to execute your plan,” he says.

Crist was practically in tears as she made her way in front of the crowd after being named a winner of Launch Pottsville.

“I can’t believe that I won,” she says. “The competition was amazing. All the contestants were awesome. I feel like I’m on a cloud right now.”

The timelines for each of these businesses opening is a little different.

For Rage Parade, the plan is to rent a small retail space next to Towne Drugs in downtown Pottsville.

Crist says she plans to have a grand opening on Oct. 3, 2022, but you’ll probably see a soft open about a week prior.

The space she plans to occupy is already an established retail space, so the funding she gets from prevailing in the competition will go to stocking the store, mostly. Initially, Crist plans to operate the business with at least one part-time employee.

The co-owners of The Chopping Block, Alex Chivinski and John Marsh, have a monumental task ahead of them to reach their planned 2023 launch date. They said during the presentation to judges on Thursday that to get their property at 370 S. Centre St. ready for an axe-throwing venue, it’ll require a major investment.

Chivinski said it’ll basically mean tearing the 12,000-square foot behemoth of a building down to its bones and rebuilding. But with sweat equity and expertise they possess among the ownership group, they say that work can be done for considerably less than $1 million-plus it’d cost otherwise.

“We’re going to take a skid loader in and take it all out,” Chivinski says of tackling the job of gutting the building where they plan to open the axe-throwing bar.

“There are no losers.” Though it may sound cliché to say there are no losers in a competition like Launch Pottsville, in this case it’s likely true.

In the end, Pottsville gets a pair of new businesses downtown. No one is denying that the city could use as many new businesses as it can get. But the other entrepreneurs, especially the two that came up a little short in the finals of the contest, thoroughly developed their business plans.

“To the competitors that weren’t funded, they still have great business plans,” Pottsville Area Development Corp. executive director Savas Logothetides says. “They are ready to go into business tomorrow. Every entity that is involved is going to make sure that that happens.”

PADCO is one of several economic development organizations and private businesses that helped organize and fund the Launch Pottsville competition.

In this article:Featured, Launch Pottsville 2022, Pottsville