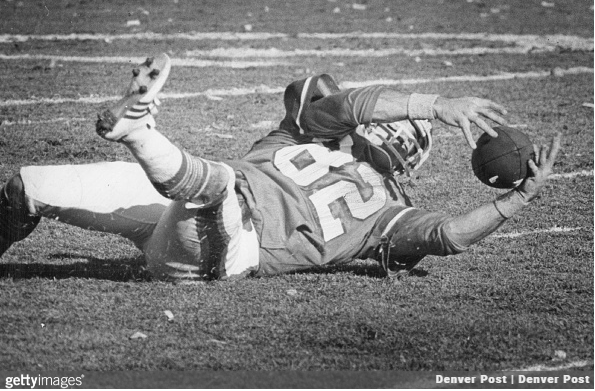 The Denver Post captured some of Dolbin’s best moments with the team in his 5 years there.

Even though Dolbin died on Aug. 1, memories he helped create not just here in Schuylkill County but also miles away in Colorado will live on for a long time.

So, let’s take a step back in time and relive some of Jack Dolbin’s best NFL moments as told by these vintage media photos from the Broncos sidelines.

We didn’t know where to start when looking through Jack Dolbin’s top NFL career highlights. You have his starting in the Super Bowl, his playoff heroics, and more. But we couldn’t pass up starting at the beginning.

This comes from Dolbin’s first regular season game in a Broncos uniform. In the 1975 season opener at home against Kansas City, Dolbin picks up an Otis Armstrong fumble and carries it 2 yards into the end zone for the score. That pulled the Broncos to within 3 points of the Chiefs and a TD later in the quarter would seal the win for Dolbin’s team.

Earlier in the game, Dolbin took in a 39-yard pass from QB Charley Johnson for a touchdown. That put Denver up, initially, 14-10. In his first game overall, Dolbin scored twice, including the scoop-and-score. He grabbed 2 passes for 51 yards. (Photo By John Sunderland/The Denver Post via Getty Images)

In this photo, Broncos receiver Haven Moses just scored a touchdown to put Denver up on the visiting Jets, 21-7. In the end zone, he’s met by the diminutive Dolbin.

Dolbin didn’t find the end zone that day in the high scoring game with the Jets. He did haul in 5 catches for 72 yards though. (Photo By Kenn Bisio/The Denver Post via Getty Images)

It’s a moment in Broncos history that fans still talk about. Dolbin’s catch/no-catch could have cost Denver a shot at the Super Bowl. Luckily (for the refs), the Broncos held on for the 20-17 win over Oakland.

In the photo above, Denver Post photographers snapped the moment Dolbin rescued a Craig Morton pass from the Mile High Stadium turf with a shoestring catch. He caught in while on the ground and got back up and ran into the end zone. Unfortunately, refs blew the play dead, saying the ball hit the ground just before this great shot was captured.

Dolbin didn’t make the box score in the AFC Championship game but this moment may never be forgotten in Broncos history. (Denver Post via Getty Images)

It was total euphoria for the Broncos in the photo above. Dolbin leaps into the arms of Jon Keyworth and Haven Moses (#25) in the end zone. He just caught a 34-yard touchdown pass from QB Craig Morton to put the Steelers away once and for all and advance to the AFC Championship game. Dolbin’s TD put the Broncos ahead 34-21 in the fourth quarter. The grab was Dolbin’s only catch in the game. (Denver Post via Getty Images)

Dolbin looks a little dejected as teammates celebrate a win over the Steelers earlier that same 1977-78 season. Haven Moses (25), Bernard Jackson and Rick Upchurch surround the Pottsville native. Perhaps the long face is because Dolbin is kept out of the boxscore in this one, bottled up by the Steelers defense. But the Broncos got the win and improved to 7-1 on the season. (Denver Post via Getty Images)

In this October 1977 game against the Bengals, Dolbin caught an 81-yard touchdown pass from QB Craig Morton. That proved to be the score the Broncos needed. It put the team up 17-10 and they hung on to win, 24-13. Dolbin recorded 2 catches that day at Riverfront Stadium in Cincinnati, totaling 91 yards. (Denver Post via Getty Images)

This great photo is packed with a story.

That’s Dolbin stretching out in front of the kicker. He barely misses blocking an extra point attempt by Giants kicker Joe Danelo. Luckily, teammate Phil Olsen (#58) gets his fingers on the PAT attempt and deflects it just enough to throw it off course. The point is the difference in the game. New York comes up short on this cold afternoon in Denver, 14-13.

Dolbin didn’t get his hands on that extra point attempt but he did haul in a 38-yard pass that day. (Denver Post via Getty Images)