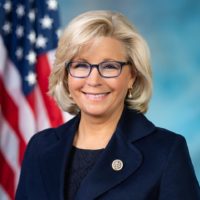 Rep. Liz Cheney of Wyoming is the keynote speaker at the annual Schuylkill GOP Lincoln Dinner.

The dinner is held this year on Thursday, Feb. 28, at Mountain Valley Golf Course, Barnesville. Dinner starts at 7 pm.

“I am so happy that Rep. Cheney has come to Schuylkill County,” GOP Chair Dan Daub says. “She is a national leader and a leading voice in our national Republican Party. Her perspective and insight is sought out by leaders across the nation. We are fortunate to hear her.”

“Rep. Cheney is informative, realistic and holds people accountable. She represents some of the best aspects of our party, and I am so thankful that she honored our county by coming here to support our county party and Congressman Dan Meuser, who is doing a great job representing us in Washington.”

Cheney is one daughter of former Vice President Dick Cheney. He stumped in Schuylkill County for then-President George W. Bush in 2004. He gave a speech to a packed house at Martz Hall in Pottsville.

Cheney was first elected in 2016. Currently, she serves on the House Armed Services Committee and Natural Resources Committee.

On Tuesday morning, Rep. Cheney led a press conference in Washington speaking against Democrat attempts to create a federal gun registry. She says two bills introduced by the House of Representatives are veiled attempts at creating this registry.

Cheney says, “They are bills they are putting on the floor under the guise of saying they are going to address issues related to gun violence. Neither one of these bills would have done anything to stop some of the tragedies that we have seen.

“But what they would do is very clearly prevent law abiding citizens from having access to firearms,” Cheney says. “What these bills would do, frankly, is create a situation where the exchange of weapons — being able to lend your weapons, private firearms sales — would not be allowed. Then you would see this is the first step towards the creation of some sort of federal gun registry, even though the bill says they won’t be doing that.”

Cheney and President Donald Trump have primarily been in lock-step since arriving in Washington together in 2016. That’s a bit surprising considering Cheney’s obvious connections to DC.

However, Cheney has been an outspoken supporter of Trump’s stance on the Mexican border crisis. She has even said it’s immoral to not protect the border. This counters the liberal view that walls are immoral (unless they’re around their houses).

Going against Trump, Cheney does not support the President’s call to remove troops from Syria and Afghanistan.